The human brain is a marvelous yet complex organ. It receives billions of sensory signals which translates to coherent messages for humans to function effectively. It is good at what it does, yet there are blind spots.

If you think the decisions and choices you make are unique because you can provide a good justification for your actions, think again. The more we analyze human behavior and the way our minds process information, the more it becomes evident that we are not the ones in charge of a lot of what we do.

Here are 11 psychological facts about human behaviors that will have your mind – blown! 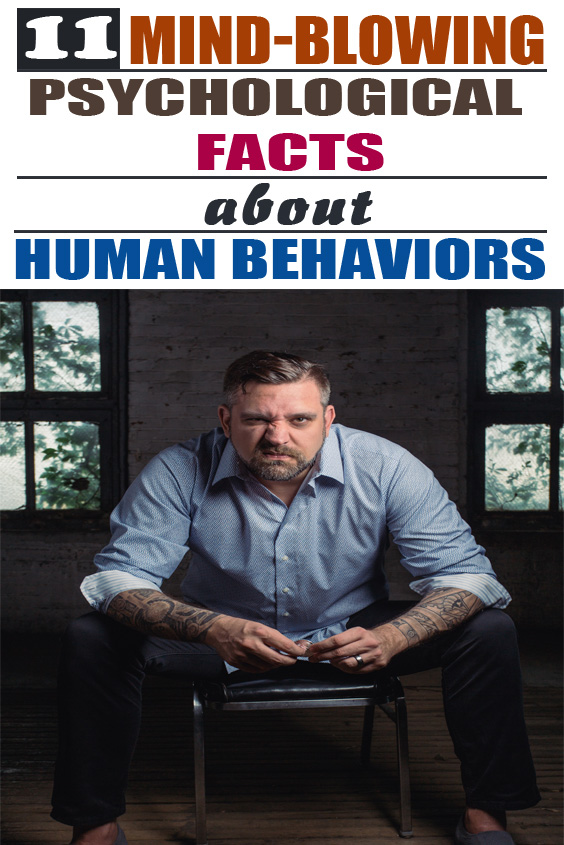 1. The brain is designed to seek problems

Ever caught yourself thinking that your life would finally get better if you get that job, promotion or win the lottery? That attaining a particular goal would iron out the problems from your future?

Well, I hate to break it to you, but that is never going to happen. Because that is just how your mind works. Our brains are designed to look for problems even when there are none.

The study findings suggest that when those signals that a person is looking for become hard to find, the person broadens his or her definition of the signal so they can go on to find it even when it is not there.

When your current problems resolve, your brain will change its definition of what it considers a problem and you will end up finding a fresh set of problems to puzzle over.

2. We look for human faces even in inanimate objects

Ever weirded yourself out by making out a human face in random objects?

You are not the only one to do so, there is even a name for it; pareidolia. A research published in the journal Cortex in 2014 showed participants of the study pure-noise images and led them to believe that 50% of them had faces or letters hidden inside. The study findings suggest that human face processing is a vital function of our brains therefore even the most minute suggestions of a face result in the interpretation of a face.

3. Why do we feel the urge to squeeze cute things?

If you have been losing sleep figuring this one out, then you are not alone. A group of really smart people at the University of California set out to answer it. Their research published in the journal Frontiers in Behavioral Neuroscience cites the irresistible urge to squeeze cute things as “cute aggression”.

The researchers suggest we experience this form of aggression to balance out strong positive emotions from overwhelming us.

4. We are not as attentive as we think

Ever found yourself dumbfounded for not noticing something obvious?

Good at remembering things? Science says you shouldn’t rely on your memory to always be accurate. Memories can change over time. As time passes our brains only retain the information from events in our life that it considers crucial, the rest is forgotten. As a memory gets buried further in the past, the more chances are that it will get distorted.

For example you have a falling out with a friend. Now when you recall a certain place the two of you attended on amicable terms, your present emotional response towards him taints the memory and you end up believing that at that event your so-called friend ignored you and acted like a snob.

6. We remember the beginning and the end

When you finish watching a movie or reading a book, the beginning and the end will leave the strongest impression on you and ultimately help you decide whether you enjoyed it or not.A research published in the Frontiers of Human Neuroscience asked participants to recall names on a list provided to them. Participants could remember the names of items at the start and the end, the middle; not so much.

7. Back up plans could make achieving the original plan harder

Back up plans are great safety nets to have when you are unsure about your original plan. But according to a study conducted at the University of Pennsylvania found that while having a Plan B is good to ease the discomfort of uncertainty it decreases the desire to achieve the original goal thereby negatively impacting performance.

Devise a backup plan but maybe not rely on it too much and pursue the original goal with the same intensity as you would without it.

When it comes to visualizing objects we all do so from an angle slightly above and tilted. When participants of a study were asked to draw a coffee cup all of them drew it as if they were viewing it from the “canonical perspective”. This seems to be a universal trait that when recalling objects in our mind we always visualize them from this particular angle.

9. We love hearing our names

Hearing one’s name activates the parts of our brain associated with social behavior. Which is why Dale Carnegie writes the following lines in his book How to make friends and influence people:

“Remember that a person’s name is, to that person, the sweetest and most important sound in any language.”

So when using another person’s name more frequently in a conversation will make them feel important and more likely to favor you.

10. How to get rid of that jingle playing over and over in your head?

Sick of that jingle or hook of a popular song that won’t stop playing in your head. Science suggests you should try remembering its ending more to hit the stop button. This is known as the “Zeigarnik effect”, which states that humans tend to remember incomplete and interrupted tasks more than finished ones.

Our experience of the time elapsed is relative, not absolute.  When we fixate our attention on a particular point in time, it feels as if time slows down so that even 10 minutes feel like an eternity. On the other had time seems to fly when we are enjoying ourselves and in the company of someone we love.

These are termed as “Time Illusions” and rely primarily on the amount of mental processing you do about the time elapsed.

Want to say something about these 11 Psychological Facts? Leave your comments below.